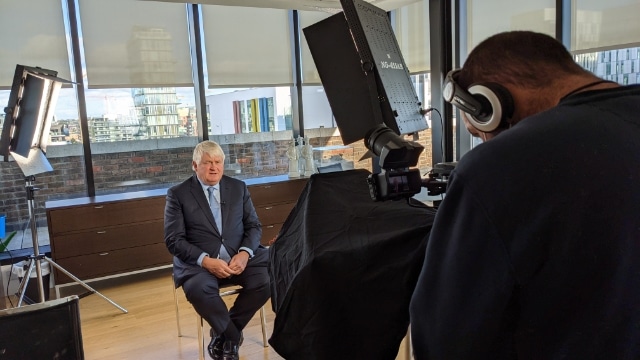 Why and how to use a Teleprompter?

Teleprompters can deliver complex script to a filmed participant. They do this by reflecting the text on a monitor onto one-way glass. The participant looks at the glass, the camera behind the glass does not see the text. When used correctly, teleprompter can convince viewers that the person is speaking without script.

Why use a Teleprompter?

There are many reasons why you should use a teleprompter including:

– The script is complex and long

– The messaging is so important that it has to be correct

How we setup a Teleprompter shoot?

When contacting VideoWorks, we’re conscious of making sure your videos turn out as professionally as possible. To successfully film with a teleprompter, we would need the script in advance, allowing us to load the script into the teleprompter system in advance. We would set-up the camera with a static background, no trees, no cars, no people. At the start of the shoot, we would do a few tests to make sure the speed of the script on the glass matches the person’s natural speed of talking.

Do I have to get everything correct in one take?

If it’s live video, one-take is important, however if it’s pre-recorded, it doesn’t have to be filmed in one-take. As mentioned, a static background is important when it comes to the post-production. This allows us to stitch together different takes using frame blending. The result is a virtually seamless one-take video meaning you don’t to worry as much about delivering one perfect take consistently across the recording. This makes the shoot a lot quicker and allows people with busy schedules to wrap early.

How to edit a Teleprompter video?

Generally, the reason people choose teleprompter services is because they want to convince viewers that they are actually speaking the script. At the heart of this transaction between viewer and speaker is authenticity. As such, any obvious manipulation or editing (beyond seamless frame blending) should be avoided.

How to organise a teleprompter in Ireland?

Get in touch with Ireland’s leading provider of teleprompter video production services, by emailing info@videoworks.ie